In one of his most influential books Phenomenological Psychology (1966), the chapter titled The Upright Posture, American phenomenologist and neurologist Erwin Straus defines the upright posture of the body as the basic criteria for differentiating humans from other living beings. Unique and essential, the upright posture is not something we are born with but need to learn and acquire it: it is a base for human development and a very specific way of being in the world.

Performance Beginning, created by dance artist Andrea Božić and visual artist Julia Willms, operates precisely within these modes of perceptual attention and structured activity. The performance space is framed in the back with a large projection screen and on the left with a table with a camera pointed at a long white line of paper. The performance begins with a kind of a prologue, the dancer addressing the audience directly, repeating an unfinished sentence several times into a microphone: ‘In the beginning there was a...’ She then passes the microphone to the drawer at the table who repeats the sentence, introducing the shared responsibility for the performance. We will witness a double dialogue: of the two performers with each other and the two of them with us – the audience.

Then the real beginning of the performance follows: the dancer stands by the left edge of the white projection background (dressed in everyday clothes, a simple white t-shirt and white jeans), with her profile to the audience, looking in front of herself. Her dark shadow stands out on the projection screen together with the drawer’s projected hand. The carnality of the hand stands out in the abstraction of the white. The skin colour in this landscape of non-colour is in fact excessive. The hand starts outlining the dancer’s shadow with a black pen and when the line of the contour is finished, the dancer moves out of the drawing with a small step forward and stops. The drawer repeats the process and they start advancing in such fashion.

Walking is established, both dancing and drawing. One of those figures that make the upright posture possible is established, the figure of continuous imbalance and a threat of a fall. Each step, no matter how small, is a loss of balance to be overcome and as such, a potential threat of a fall. The second established figure is the drawing gesture, as the getting up from the floor and the capacity to balance on one’s feet has enabled the humans to develop hands and fists, it enabled lateral movement and freed the creative gesture. The upright posture moved the body away from the parallel position close to the floor and enabled a view into a distance. As well as the distance towards the world around us. The dancer’s arm gestures are initially minimal, only what is necessary to follow the step. Later, the movement becomes freer but is always initiated by the step. And a small private gesture of fixing hair is present as a gesture reminding us that Beginning works with the audience’s perception and a kind of choreography of alertness of the view.

Sitting in the audience and, by this, keeping most of the elements of the upright posture, including the struggle against the gravitational force, we alertly look at the dancer beginning a dialogue with the drawer by walking less predictably and the drawer moving the paper backwards, this way returning to the phrases from before. At one point, their dialogue becomes noisy. And this noise, just like the skin colour against the white background, is an excess of noise in a performance with no pre-determined sound background. The soundscape of the performance consists of sounds produced by the performance tools: the performer’s body (stomping her feet on the ground or on the chair), the pen and the brush (hitting the paper) but also the audience (coughing, breathing softer or louder, the sound of a cell phone falling on the ground...).

We have already mentioned that, at the beginning of the performance, the performers say the sentence: “In the beginning there...’ and at the end of the performance the drawer writes on the paper: “In the beginning there was a” and makes the last word into a stain. This is preceded by a crescendo of the performance in which at one point, as a reply to the stains on the paper, the dancer loudly spits on the projection screen. The spitting seems like resistance to the ever more aggressive drawing gesture and as a trace of the inside of a body which was, until that point, only outlined from the inside. Now there is an organic trace of a liquid of the concrete individualized body. The drawer’s reaction to the dancer’s spitting is even more vehement and the paper is covered with ever more black paint.

This is when the third part of the performance begins, a kind of an epilogue in which the dancer approaches the table and stands next to the drawer who places the paper line at its beginning. In the slow and continuous movement of the projected paper, the performers and the audience together watch everything that has been drawn – a kind of an abstract-expressionist movement notation. And in this final review of the drawn material it is as if we also hear the sounds associated with some of the drawings anew and reconstruct, in our memory, the dancer’s movement that caused the drawer’s intervention or was its consequence.

Erwin Straus says: “A human is not only the consequence of a long term evolution but is also a new beginning.’ The 25 minute performance Beginning by Andrea Božić and Julia Willms is a short dance phenomenological essay on the upright position, the step and the need to preserve, record, mediate and memorize this tense and continuous fight against the gravitation force, this unique being in the world. Directing the viewer’s micro perception to essential movements. By outlining the view/movement. 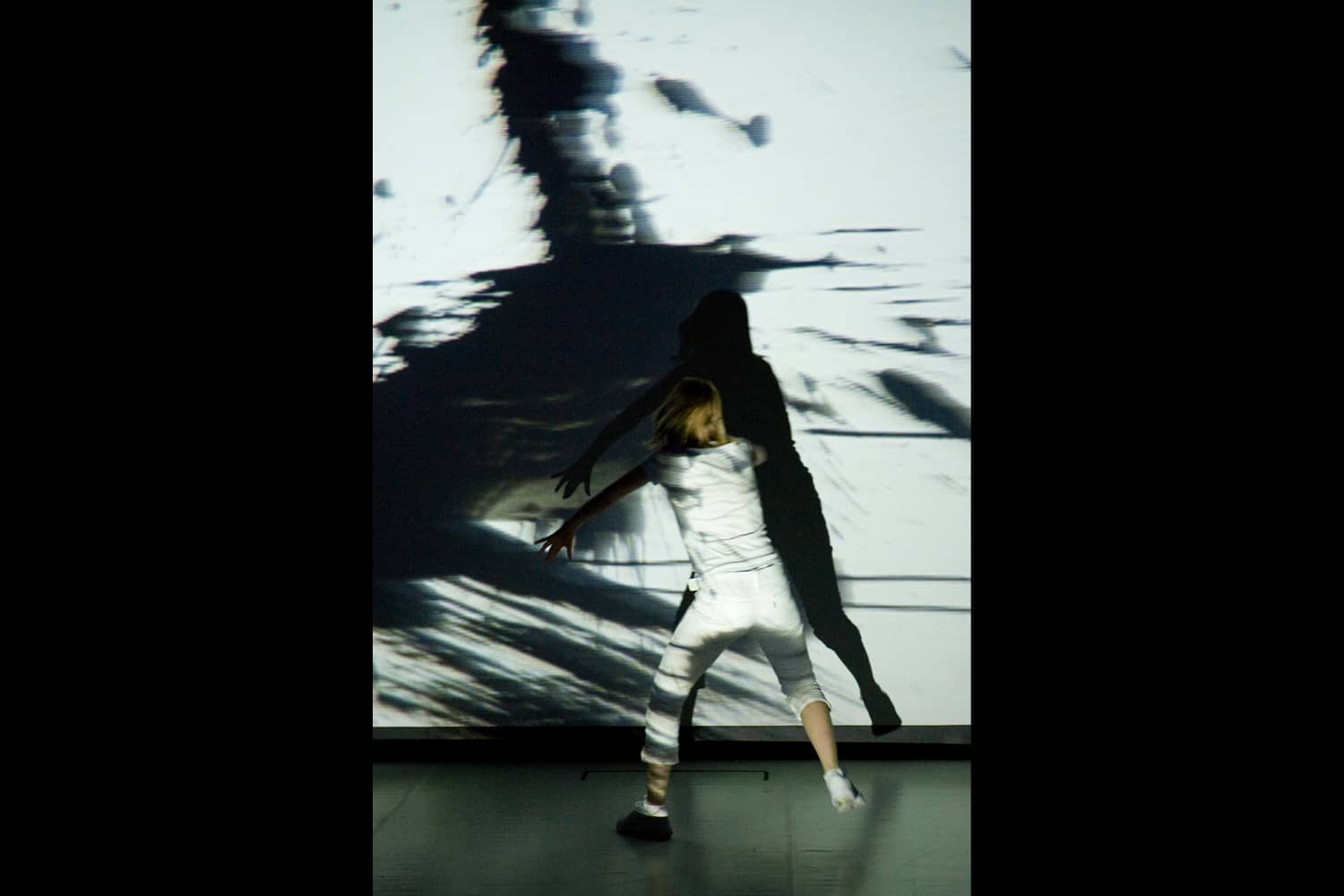